Even though Thanksgiving isn’t really a holiday celebrated here in Australia, this year my family decided to get in on the action anyway as a number of us will be away over Christmas (and we like to party with or without good reason). So, in keeping with tradition, I made a pumpkin pie for dessert. I had no idea what to expect having never tried one before, but gave a highly rated recipe I found online a go and was really pleased with the result. If I didn’t know there was pumpkin in there (and it wasn’t orange) I wouldn’t pick it because it’s really the vanilla and spices that come to the fore, with the pumpkin providing a creamy, sweet back note. Pumpkin-y or not it was delicious and I’ll probably make it again when pumpkins are in season.

Filling
2 cups pumpkin puree (made by roasting pumpkins, scooping out the flesh, blitzing it into a smooth paste in a blender and then putting it in a sieve for an hour or so to remove the excess juice)
3 large eggs
½ cup sugar
⅓ cup brown sugar
¾ cup cream
1 ½ teaspoons vanilla extract
1 ½ teaspoons ground cinnamon
1 teaspoon ground nutmeg
½ teaspoon ground ginger
¼ teaspoon ground cloves
A pinch of salt
1 quick grind of pepper (i.e. a really small amount, sounds odd but it works!)

Method
To make the pastry, put the flour, icing sugar, butter, yolk & water into a food processor and process until it just comes together. Press into a ball, knead gently on a floured surface until smooth & then refrigerate, covered in clingfilm, for 30 mins.

When the pastry has chilled, roll dough on a floured surface until large enough to line the tin (I often have a bit left over). Lift pastry into tin, ease into the sides & then trim the excess.

Cover the pastry with a sheet of baking paper and fill with pie weights or uncooked rice. Bake in the oven for 10 minutes.

Meanwhile, whisk eggs and sugar until smooth. Add the pumpkin puree, cream, vanilla and spices and stir until all incorporated. 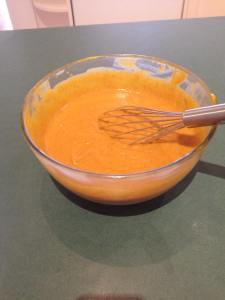 Pour mixture into pastry case (obviously remove the baking paper and pie weights first!!) and smooth over the top. I ended up having a bit of pumpkin filling left over that I might use in muffins or something (if I don’t eat it all first :P) 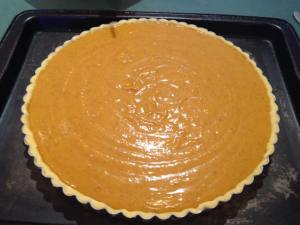 Bake pie in the oven for 10 minutes before reducing the heat to 160°C fan-forced for around 30-40 minutes, or until a skewer inserted comes out clean.

Let cool completely before transferring to a serving platter and then serve at room temperature with whipped cream or ice cream. Enjoy!

Warning: graphic cake content🤰🏻
We’re regularly asked to bring a plate for celebratory morning/afternoon teas at work and I have an unfortunate habit of remembering *just* before I go to bed the night before 🤦🏼‍♀️ Fortunately, this 5 minute chocolate and peanut butter fudge “recipe” (it’s so simple it feels cheeky even calling it that) is the perfect remedy for those occasions and is made using just 5 ingredients you probably already have in your pantry 🍫 It’s also melt-in-your mouth delicious and looks far more impressive than it should for the little effort it takes!
My Milk Bar style funfetti layer cake is now up on the blog 🍰 3 layers of funfetti cake, fluffy vanilla buttercream and crunchy cookie crumbs combine to make a fun and nostalgic celebration centrepiece 🎉
Of all Christina Tosi’s delicious innovations, I am most grateful for her cookie crumbs 🍪 Crunchy and flavourful, adding a smattering of these between cake layers takes your cake to the next level 🍰 Even Bailey finds them irresistible 🐶
This cake combines several of my favourite things - lemon curd, torched meringue and a light and fluffy sponge 🍋 Yum!
Rich, truffle like texture ✅
@portelliotbakery violet crumble doughnut of the month 🍩 As always, absolute perfection 👌🏼 Thanks @laura_bills for sharing 😍
My Everest 🏔 This @milkbarstore inspired funfetti birthday cake was a labour of love, but I’m pretty pleased with the end result 🍰 Sure, extricating the cake from the cutter and acetate strips took a few years off my life but the rest of the process was actually quite straightforward… even fun (am I sick?!)🎂
#flashbackfriday to the first and probably most ambitious layer cake I’ve made, way back in 2013 🍰 It was a bit of a disaster with food colouring spillage making the kitchen look like a crime scene and my icing nozzle exploding (hence the “unusual” texture of the icing), but it tasted great and I loved the challenge 🌈 I’ll be challenging myself again this weekend to make a milk bar style birthday cake for my sister - fingers crossed it’s smooth sailing this time 🤞🏼